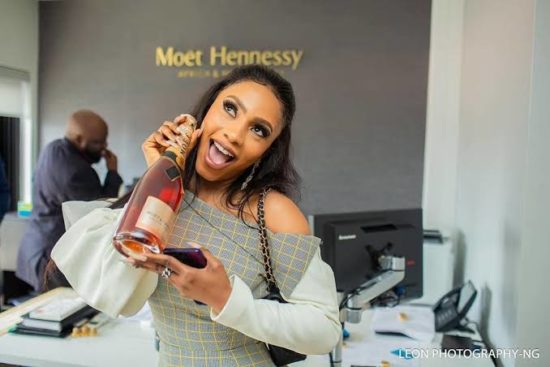 Mercy Eke has narrated what transpired between her and Moët and Chandon that led to the viral story which online months ago.

Recall that when the deal was announced back then, some doubters wrote official notes to the leadership of Moet & Chandon to make inquiries about the authenticity of the deal.

The company debunked the news of signing Mercy as an ambassador days after, and the company has also shed more light on the link between them and Mercy.

Mercy has now addressed the controversy and according to her, she was approached by a champagne company that wanted her to sign a deal with them and also attend a party they wanted to organise and she obliged.

The company being impressed with the outcome of the meeting held with Mercy and her management team, paid her the agreed sum, even before signing the dotted lines.

This happened on a Wednesday and Mercy was supposed to start the activation of the deal on Thursday which was the second day, only for a fan to spoil the partly sealed deal.

Unfortunately, the company worker told the fan that Mercy had no deal with the company and would not be attending the said party.

After the call, the fan was reported to post the information given on the internet and making internet users troll Mercy.

According to Mercy, that did not go well with her. “Immediately I saw that, I called Chief Priest and told him what was going on on the internet and we decided that if the company say they do not know me, me too do not know them.

I told the company that if I was going to go ahead with the deal, they should release an official statement saying that they know me and to also apologise.

“My management made me return the money because, they refuse to apologise and the damage has been done.”

According to her, she was unable to go ahead with the deal, though the company was a big and well recognised one.

She blamed the loss of money, damage to her integrity and image to the fan who went ahead to make public information that was not true and also not gotten from the right source.

However, trolls have began to drag her on social media for supposedly lying at the reunion about her alleged Hennessy and Moet deal.

The trolls cited that a brand like Moet will not be that disorganised.