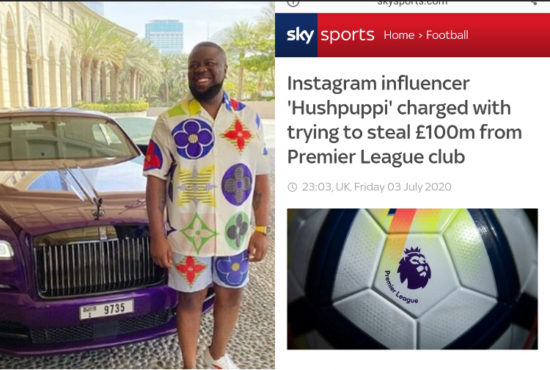 Hushpuppi’s arrest and conviction was published in a recent report on Skysports news after the Dubai police handed him over to the FBI for extradition.

Skysports in its report wrote;

Instagram influencer Ramon Abbas, known as ‘Hushpuppi’ to his 2.4m followers, has arrived in the US to face criminal charges including one scheme to allegedly steal £100m from an unnamed Premier League club.

The Nigerian 37-year-old, who resides in Dubai, is known for posting photographs of luxury cars and five-star hotels on Instagram.

He was arrested in UAE last month and then extradited to the US when FBI agents obtained custody of Abbas, who faces charges of conspiring to engage in money laundering that is alleged in a criminal complaint filed on June 25.

Abbas made his initial court appearance in Chicago on Friday, and is expected to be transferred to Los Angeles in the coming weeks.

On top of the alleged scheme involving a Premier League club, Abbas and others allegedly attempted to launder hundreds of millions of dollars through business email compromise (BEC) frauds and other scams targeting a US law firm and a foreign bank.

Abbas has said his Instagram posts are aimed to inspire others. “I post a few of these things so that someone can see my page someday and decide not to give up,” he said in one post.