The Lagos state government on Tuesday, June 2, made known its position on the possibility of lifting the coronavirus-induced ban worship centres like churches and mosques.

Speaking on Tuesday, Prince Anofiu Elegushi, the commissioner for home affairs, stated that as the epicentre of coronavirus, Lagos is not yet ripe to contain the risk involved in allowing religious gatherings again for now.

Elegushi pointed out that the agreement to keep worship centres shut until further notice was reached at the 2020 ministerial press briefing convened to honour Governor Babajide Sanwo-Olu’s first year in office, The Guardian reports.The commissioner said that many religious leaders in the state have claimed that they cannot take the responsibility of ensuring compliance with social-distancing rules by their congregations.

He, therefore, noted: “So in the meeting, we ruled out in totality the issue of reopening the religious houses until we have a clear coast for us to do so.

The Federal Government mentioned it, but it never ruled out the state in achieving that pronouncement, so all states will have to look at the possibility of doing so in their respective states.” 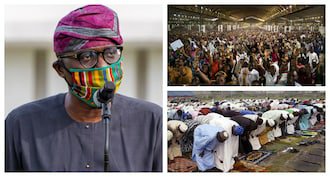